A Great Mix of Science and Technology – How a New Jersey school district discovered amazing results.

It’s as if George Couros knew something about the way the education field was headed when saying that.

And it is a quote that Richard DiMauro strongly agrees with. Richard is the Instructional Technology Coach for Little Egg Harbor School District in New Jersey, and it’s his job to make sure the school is equipped with all of the necessary technology and educational support equipment needed to conduct the classes. He is also responsible for training and assisting teachers with their tech integration into their lessons.

As you can imagine, he has had a very busy year!

Planning for a pandemic

Richard admits that neither himself, the school, and the other teachers were prepared at all when the pandemic hit, pulling in the shutters on schools for many, resulting in remote, hybrid learning and online classes being rolled out.

“If you had said to me a year ago that we would have to shift the entire school year to a remote learning model, I wouldn’t have believed it possible,” Richard says, explaining how the pandemic has forced everyone to think in more creative ways on how to deliver and present their lessons, and quickly learn the new technology needed to do that successfully.

Richard first became aware of OKIOCAM through his Assistant Superintendent, who handed him a handful of document cameras to try out. Knowing how instrumental the cameras are to distance and hybrid learning, he played around with them to see which ones suited the needs of the school and the teachers.

At the top of the list of criteria was serviceable, easy to use, and flexible. The OKIOCAM ticked all of the boxes, leading to Richard and the school purchasing a large quantity for each of the teachers.

“I love how portable the OKIOCAM is,” Richard enthusiastically tells me, “I can fold it away after I have used it, put it back in the box, and literally put the box in my pocket to take with me, there is no other [document camera] box that fits in my pocket.”

The ease of plugging it in and being ready to use straightaway was another reason for choosing the OKIOCAM over others. The setting up and fiddling around to get the others to work properly, and the training of the teachers seemed like a headache waiting to happen.

So much so, that Richard created a document complete with short videos to explain how to set up and install each of the different new technologies to help the teachers transition to a fully virtual teaching model. The instructions for the OKIOCAM read, “Just plug it in! Seriously, just plug it in!”

And it’s not just virtual and hybrid teaching that the OKIOCAM has been used for. As teachers embrace technology and tomorrow’s lessons look more like Silicon Valley showrooms than traditional classrooms, educators are creating learning opportunities that were not possible before.

Such as the science teacher who used their OKIOCAM camera to teach kitchen chemistry to the students during lockdown. Portability and flexibility undoubtedly helping to make a very interesting sounding class.

Or the interview with a professional scientist based in Ohio, in which the students were given the chance to ask questions and find out more about what the job entails first hand — this made possible with an OKIOCAM camera and Google Meet.

“Teachers and schools need to look overall at children’s education, not just academia. Technology will play a big part in that,” Richard says.

Teachers have been finding their own ways to enhance their lessons by making mini videos for students to review or for when a pupil is absent or supporting resource material.

Richard lauds the teachers and staff at his school district for embracing the technology and coping with what some considered as ‘being thrown in at the deep end.’ “We had teachers who didn’t even know what Google Classroom was 14 months ago, and [who] are now live-streaming lessons and integrating different technologies together,” he says, “some are getting Google certified, so confidence has grown in the use of technology.”

From car mechanic to driving instructor

And he firmly believes that classroom technology is here to stay, as students have been exposed to so much of it. ”Ultimately it is down to them to decide which ones stay and which ones get replaced, based on what they like and want to use,” he says, explaining that he judges the difference between a good EdTech product and a not-so-good one from the reactions, opinions and engagement from those hoping to benefit from it — the teachers and students — and aligning to the schools’ standards. Richard often asks the students which of the technologies and platforms they prefer to work with, using that as an indication for future purchases, although he agrees that schools need to be careful not to overdo it and overwhelm them with too much technology.

Richard describes himself using the analogy of a car mechanic over the past year, a fixer to get classrooms and teachers prepared and up-and-running, which has given little time to discover the time-lapse and stop-motion functions. He is looking forward to the next year which will allow more time for exploring the OKIOCAM and other tools, which he can then start demonstrating among the school district’s K-6 teachers.

Addressing the concerns of whether the past year has affected pupils and their social skills, and other soft skills, Richard gives us a pause for thought. “Students have been resilient despite the challenges of distance and blended learning. Socially, it looks different but they have coped and still kept in touch with each other through other means, such as Google Meet and Minecraft.”

One thing is for sure though, technology will never replace the relationship between teachers and students, or the support that a teacher offers.

If you want to learn more about OKIOCAM or you’re interested in placing an order, please contact our sales team at sales@okiolabs.com. 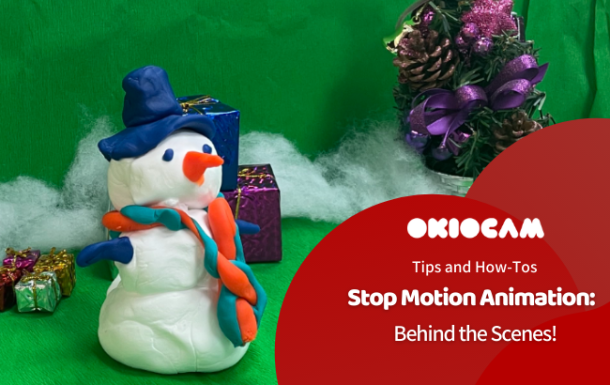 Stop Motion Animation: Behind the Scenes!